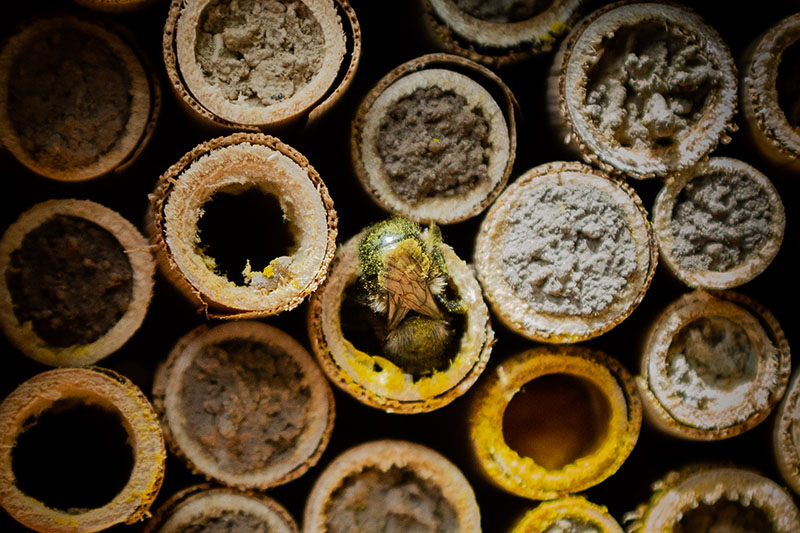 Mason bees are only active in your garden for about 4-6 weeks, beginning early spring. They spend the rest of their lives inside their nesting chambers - eating, growing, spinning cocoons, developing into adults, and eventually hibernating as fully formed adults until the temperatures are warm enough to emerge in the spring.

Below is a seasonal look at a year in the life of a mason bee! For a much more in-depth dive into mason bee biology, or if you're a high school science teacher looking to include pollinator biology in your curriculum, check out Mason Bee Edu!

During the colder months, fully-formed adult bees hibernate in their cocoons inside the nesting chamber. Once-daily temps warm to around 55°F/13°C, mason bees begin to emerge as fully formed adults. They spend the next several weeks mating, building nests, collecting food for their offspring, and laying eggs.

Typically, mason bees have one generation, or brood, per year. Males always emerge first - about two to four days before the first female. Since mating occurs almost immediately after females emerge, it's common to see male bees waiting at the nest or patrolling the surrounding area. Males die shortly after mating.

After mating, the female mason bee leaves the nest site for a few days while her ovaries mature. Don't be alarmed if your females have disappeared for a few days; they often return to where they emerged and search for a nearby nesting cavity to lay their eggs. This behavior is why we suggest bee raisers place their mason bee cocoons in or near their bee house - it increases the likelihood the females will choose to nest in the provided house. 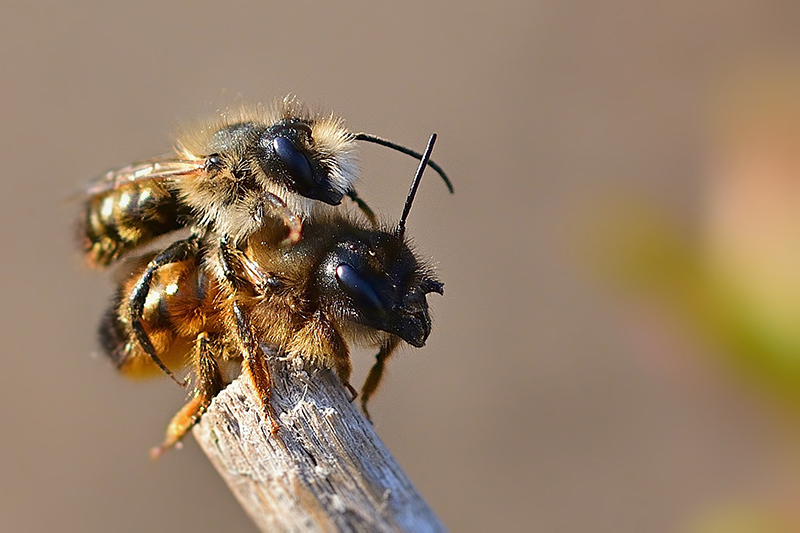 Mason bees are cavity-nesting insects. They nest in hollow stems of plants or tunnels or holes formed by wood-boring insects in the wild. This nesting behavior allows us to provide artificial nests constructed of wood trays, bundles of cardboard straws, or natural reeds to help mason bee populations thrive in our backyards and gardens.

When searching for a suitable nest site, a female bee may inspect numerous cavities: tunnel depth, diameter, and nest material influence the ratio of male to female eggs. Mason bees prefer a tunnel depth of about 6 inches, with a cavity diameter of about 8 mm, and the back end of the cavity sealed off to protect from predators.

Once the female chooses her nest site, she begins collecting nesting materials and laying eggs. One essential nest-building material for mason bees is clay-rich mud! Female mason bees build the walls of their nesting chambers out of mud or other "masonry" products to give each developing bee its own room in the nesting chamber. Females will visit nearby clay-rich mud sources and collect mud balls that they carry back to the nest. The mud from approximately ten trips is needed to build the nest's innermost wall!

After completing this innermost wall, the females shift their focus to foraging for pollen and nectar. When the females return from foraging, they enter their nest headfirst and regurgitate the nectar they collected onto the mud partition. They will then back out of the nest, turn around, and back into the nest to deposit pollen by scraping it off their scopa with their hind legs. Each female repeats this process an average of 25 times to build up an ample pollen-nectar loaf for the developing larvae.

The female lays a single egg on the pollen loaf's surface. She then collects mud to create another partition and seal the brood cell - allowing each developing bee to have its own room. Females lay eggs that will develop into females at the back of the nest and eggs that will develop into males in the front. She does this because the back of the nest is safer from predators, and females are more important than males in reproduction.

Each female bee repeats this process until the nesting cavity is filled with brood cells. To protect the nest from predators, she seals the nest's opening by building a thick mud cap, often leaving a small space of air between the mud cap and the nesting chamber as an extra layer of protection.

During these foraging trips, the female bee is repeatedly dusted with pollen that remains trapped among the hairs covering her body – this helps to pollinate the flowers she visits. 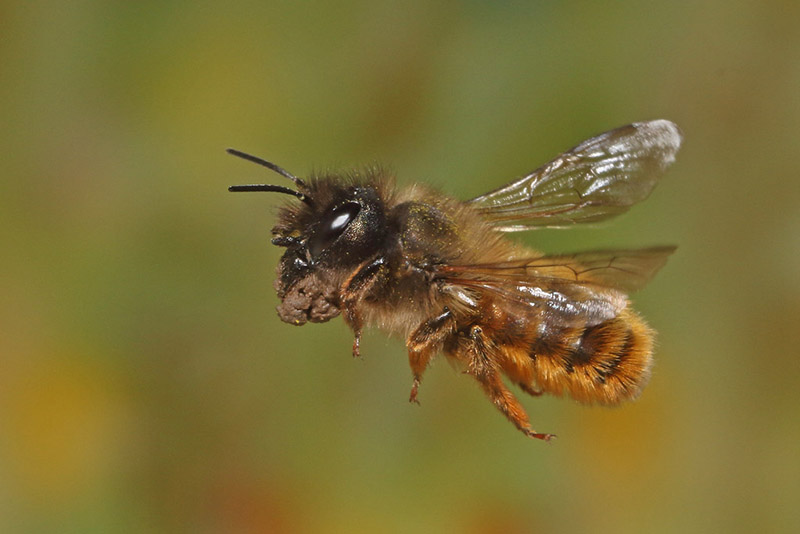 The larva slowly feeds on the pollen loaf when the eggs hatch (after 1-2 weeks, depending on temperature). Mason bees go through five stages (instars) of development over the next month. During this time, the larvae feed on the pollen loaf, grow, poop and molt. After consuming the entire pollen loaf, the larva spins a waterproof cocoon of silk fibers.

In early summer, the cocooned larva enters a period of dormancy, called the prepupal stage, which lasts one to three months. The length of this dormant state is temperature-dependent. Temperature fluctuations, exposure to cold, or extreme heat may cause some larva not to develop into pupae at all. For this reason, we suggest bee raisers remove, protect, and store completed nests over in an area with natural outdoor temperatures over the summer. 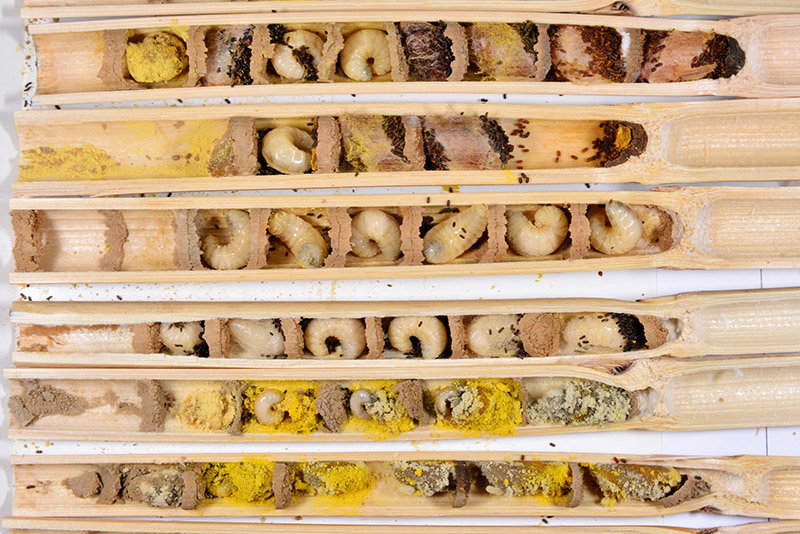 In midsummer, the immature bee molts into a white pupa within the cocoon. These pupae resemble adult bees but are white in color.

Over the next month, the pupa molts again inside the cocoon. It sheds the white pupal skin and develops adult coloration, starting with the eyes' darkening before the body darkens to its final color. The timing of the final molt to adulthood varies based on temperature and geographic location. To ensure we don't disrupt the development of the bees, we recommend keeping completed nests in an area with natural outdoor temperatures until at least October. 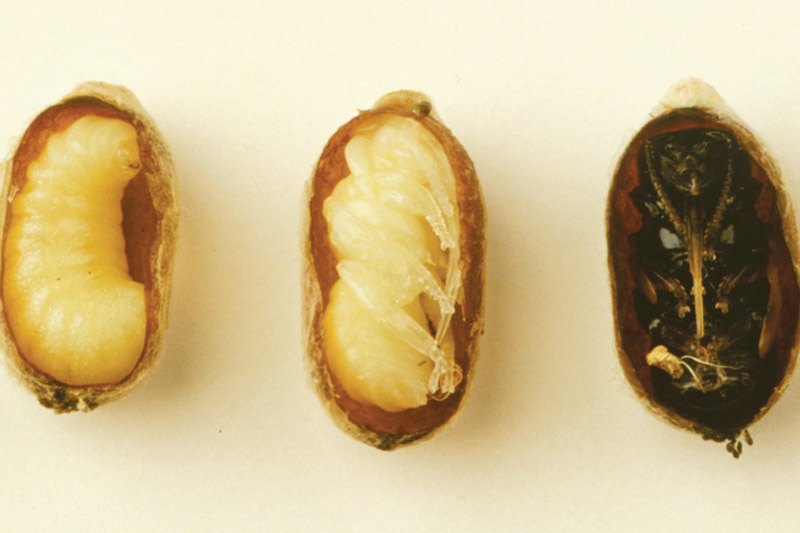 Fully formed adult bees remain dormant throughout the winter inside their cocoons. The young adults enter into winter diapause - a period of reduced metabolic activity that allows adult bees to maintain their energy stores and emerge healthy and active the following spring. The winter diapause period is why we recommend storing your harvested cocoons in the refrigerator until the following spring. The consistent cold temps allow your bees to conserve their fat stores and enables bee raisers to safely delay bee emergence until spring blooms have opened.

Once daily temperatures reach around 55°F/13°C, the bees emerge, and the cycle starts all over again!